China's Stakes in the Russian Arctic 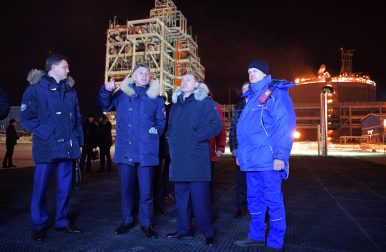 From the left, Russian Energy Minister Alexander Novak, Novatek's CEO Leonid Mikhelson, and Russian President Vladimir Putin visit the Yamal LNG plant in the port of Sabetta on the Yamal peninsula beyond the Arctic circle (Dec. 8, 2017).

On December 14, 2017, during the annual press conference, Russian President Vladimir Putin emphasized Russia’s will to encourage China’s participation in Arctic energy projects and to reassure Beijing that it would benefit from the emerging opportunities of shipping through the Northern Sea Route. Earlier in December 2017, one of the largest Russian private natural gas companies, Novatek, launched the production of liquefied gas at the first LNG train of Yamal LNG plant, located above the Arctic circle. The initial capacity of the first train is 5.5 million metric tons per year, while the ultimate production will reach 16.5 million metric tons per year. According to Denis Pereventsev, a vice president at rating agency Moody’s in Moscow, the start of the production testifies to the appearance of a new LNG global player. The project is being developed by JSC Yamal LNG, a joint venture between the Russian company Novatek (50.1 percent), French company Total (20 percent), China National Petroleum Corp. (20 percent), and Chinese Silk Road Fund (9.9  percent).

For Russia, the successful launch of the project was important at least for two reasons. First, considering rising competition from Qatar, Australia and the United States, increasing LNG exports is critical for Russia’s energy export industry. Second, the successful launch of the Yamal LNG project was an opportunity to demonstrate the world that, despite the sanctions, Russia is capable of replacing Western lenders and finding other financial and technological resources to accomplish its goals.

Russia’s interests are clear. The question is, what are the driving motivations and interests that stimulated China’s decision to take part in the Russian Arctic project?

Outcomes of Chinese Participation in the Yamal LNG Project

The Yamal LNG project was celebrated by Chinese media as the first Arctic energy project within China’s Belt and Road Initiative (BRI). The BRI was proposed and actively promoted by President Xi Jinping and is intended to create conditions for a regional economic collaboration among the states along the proposed routes, while at the same time emphasizing China’s growing role in global affairs. The Arctic part of the route — named the Ice Silk Road — is considered to be its important part of diversifying China’s maritime trade routes.

Over the last few decades, China has expressed an interest in commercial navigation via the Northern Sea Route along the Russian coast. It is forecasted that by 2020 the bulk of shipped goods through the NSR will be 5 to 15  percent of China’s international trade. In 2013, China Ocean Shipping Company (COSCO) sent a cargo vessel for commercial navigation from the port of Dalian to Rotterdam via the NSR. Since then the number of cargo vessels passing along the NSR has been growing; in 2016 and 2017 COSCO sent five and eight ships through the NSR, respectively. However, over the long term, China’s interests in commercial navigation through the NSR look uncertain and depend on Russia’s official policy toward development of the Arctic route. For several years, high-level Russian officials have been urging Chinese partners to cooperate in the joint development of the NSR.  Moscow is particularly interested in Chinese investment into Russian port infrastructure along the Arctic route. China has articulated interest in financing deep-sea port construction in Arkhangelsk, and the development of the Belkomur railroad that will connect cities of Arkhangelsk and Perm.

At the same time, in 2017 Russia introduced amendments into the Merchant Shipping Code that stipulate the exclusive rights of vessels navigating under the Russian flag to use the NSR to ship natural gas, oil, and coal produced in Russia. Such amendments primarily aim at creating incentives for Russian shipping and energy companies to enhance the commercial navigation through the NSR and natural resource production in the region. The key issue is how Russian state officials view the further involvement of Chinese businesses in its economic projects in the Arctic. In particular, the question remains whether Chinese companies’ future role will be limited to investment only or if their involvement will be expanded based on concessions.

In relation to the participation in the Yamal LNG project, for Beijing, it has resulted in several major contributions that, in general, correspond to the country’s economic and geopolitical interests.

First, China has been one of the biggest investors in the project, whose financing became critically important after sanctions were imposed by the United States and Europe on the Russian Arctic projects as the results of the Ukraine conflict in 2014. In particular, the Export-Import Bank of China and China Development Bank allocated credit in the amount of €9.3 billion ($11.4 billion) and €1.33 billion ($1.63 billion) respectively, for a period of 15 years. The Silk Road Fund invested €1 billion ($1.2 billion) in acquiring 9.9 percent of shares in the project.  Russian investment to the project accounted for 150 billion rubles ($2.6 billion) from the Russian National Wealth Fund and €3.6 billion ($4.4 billion) from the Russian banks Sberbank and Gazprombank.

China has at times driven a hard bargain for this level of investment. Although Novatek and CNPC concluded an agreement on the purchase of a 20 percent equity share in the project in 2013, it took several additional years of negotiations to reach consensus on the conditions of China’s investment. In September 2017, China requested that the Russian government reduce the tax on dividends from 10 percent to 5 percent for Chinese companies. The existing agreement between Russia and China stipulates that for a company to qualify for the 5 percent tax rate, it should invest at least €80,000 and hold at least 25 percent of shares in a project. Both Chinese companies own less of 25 percent of the Yamal LNG project. According to Alexander Ovesnov, head of the tax dispute resolution practice department at the ACG “MEF-Audit,” a change in the dividends tax is possible only through the adjustment of the Russia-China agreement, which will eventually impact other existing projects between the two countries.

In addition to investment, the Chinese contribution included technical support to the Yamal LNG project. In 2014 Yamgaz SNC made an agreement with the Chinese Offshore Oil Engineering Co., Ltd.  (COOEC) to manufacture the Module Fabrication Work Package 1, primarily 36 modules for liquefying the gas at the cost of $1.6 billion. Chinese companies gained experience and knowledge of gas production in harsh climatic conditions, placing China among the unique group of producers of equipment for oil and gas production in the Arctic region.

Successful participation in the project helped China not only to increase its status in world energy markets but also to further promote the BRI on an international level. The launch of the project contributed to the prospective involvement of Chinese companies in other Arctic energy projects, and, therefore, will enhance the Chinese presence in the region. For example, during President Donald Trump’s official visit to China in November 2017, China Petrochemical Corp., also known as Sinopec Group, China Investment Corp., the Bank of China, the state of Alaska, and Alaska Gasline Development Corp. signed a joint development agreement to enhance the development of Alaska’s LNG project. The agreement was a part of the $250 billion in U.S.-China deals discussed during Trump’s trip to Beijing. However, the agreement mainly confirms the Chinese company’s intentions to take part in the project; any future Chinese involvement is a matter of further official negotiations between the two sides. In general, Alaska plans to produce 20 million metric tons of LNG a year and could represent an important competitor for the Russian projects in which China has already invested.

The Yamal LNG project will diversify China’s energy sources and will contribute to the country’s transition from coal to gas energy consumption. Recently, China has become obsessed with the idea of replacing coal with natural gas and the quest for stable natural gas supplies has become one of the main tasks for China’s foreign policy. According to the 13th Five-Year Work Plan for Controlling Greenhouse Gas Emissions, by 2020 non-fossil-based energy sources are supposed to account for 15 percent of total consumption, and the share of coal will drop below 58 percent.

China’s particular interest in LNG can be explained as it enables Beijing to avoid pipeline construction and to diversify energy importers. It is forecasted that in China the demand for natural gas will increase from the current 209.7 billion cubic meters up to 620 billion cubic meters by 2030, and only 50 percent of the demand will be supplied by domestic production. Russia is expected to be among the top foreign LNG sources. When the full operation of the Yamal LNG project is reached, China will receive an annual supply of 3.5 million tons of LNG.

To conclude, China’s participation in the Yamal LNG project represents one of the examples of the country’s geopolitical and economic interests aligning in various aspects. On the international level, it provides an opportunity to further promote the BRI and upgrade China’s status as an active player in international energy markets and in the Arctic. On the domestic level, it helped to gain experience for Chinese businesses as investors and manufacturers in a large-scale international energy project located above the Arctic circle. The Yamal LNG project also represents another step toward the realization of the coal-to-gas strategy recently initiated by the Chinese government.

Overall, based on the mutual interests expressed by Russia and China to further develop economic cooperation, it is likely that we will see more future involvement of Chinese companies in various projects in the region. However, the question remains as to who will be the main beneficiaries from these economic activities in the Arctic region.

Nadezhda Filimonova is a Research Assistant and Ph.D. student at the University of Massachusetts Boston, U.S.

Svetlana Krivokhizh, Ph.D. is an associate professor at the National Research University Higher School of Economics in Moscow, Russia.