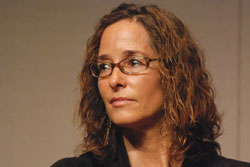 Julienne Stroeve is a senior research scientist at the National Snow and Ice Data Center (NSIDC) within the Cooperative Institute for Research in Environmental Sciences (CIRES). She received a Ph.D. in geography from the University of Colorado, Boulder for her work in understanding Greenland climate variability. Subsequently her Arctic research interests have focused on the sea ice cover and include sea ice predictability, climate change and associated local and large-scale impacts. She has conducted several Arctic field campaigns.

Julienne’s work has been featured in numerous magazines, news reports, radio shows, and TV documentaries. She has given keynote addresses around the world on Arctic climate issues and briefed former Vice President Al Gore. Julienne has published more than fifty articles in peer-reviewed journals and contributed to several national and international reports on Arctic climate change.